RR vs DC: 58th match of IPL 2022 is being played between Rajasthan Royals and Delhi Capitals at DY Patil Stadium in Mumbai. In this match, Delhi captain Rishabh Pant won the toss and decided to bowl first. After this Rajasthan Royals scored 160 runs for 6 wickets in 20 overs after playing first. In reply, Delhi scored 161 runs and won the match by 8 wickets. During the match, a poster caught everyone’s attention. This poster suggested what the 15-man Indian squad should be in the T20 World Cup 2022. The cricket lover was showing this poster in the stand and it was caught on camera.

First Innings Condition
Rajasthan Royals, who came out to bat after losing the toss, did not have a good start. Jos Buttler, who was running in excellent form, got out cheaply today. He scored just seven runs in 11 balls. After this, the second opener Yashasvi Jaiswal also returned to the pavilion after scoring just 19 runs. After this, R Ashwin and Devdutt Padikal, who came to bat at number three, took the lead. Ashwin scored 50 in 38 balls and Devdutt Padikal scored 48 runs in 30 balls. Chetan Sakaria, Enrique Nortje and Mitchell Marsh took two wickets each for Delhi Capitals.

Shimron Hetmyer Wife: Hetmyer’s wife is no less than a model, the love story of both is very interesting 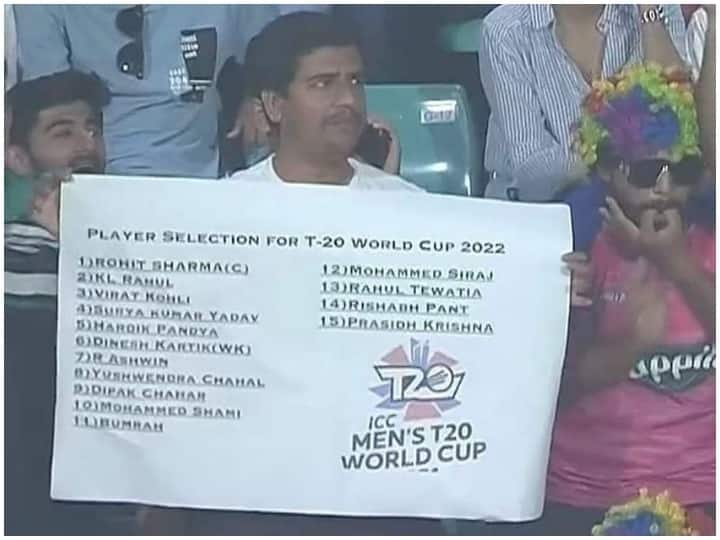 R Ashwin: The 58th match of IPL 2022 is being played between Rajasthan Royals and Delhi Capitals at the DY… Read More »RR vs DC: In the 179th match, Ashwin studded the first fifty of IPL, know how was the performance so far South Africa Tour Of India: IPL 2022 season is now in its final phase. Now all eyes are on the… Read More »Team India can be announced for South Africa series on this day