Why Kanwar Yatra Can Become ‘super Spreader’ Of Corona

Point number-1: If a large number of people gather together, then there is a fear of spreading the infection.
In fact, when the Yatra was organized in 2019, about 3.5 crore Kanwariyas from Delhi, Uttar Pradesh, Haryana had reached Haridwar. Whereas more than 2-3 crore people had gone to different pilgrimage places in western UP to offer water to Shiva temples. In such a situation, it is believed that if so many people gather together then a large number of people can get corona infected. Haridwar is one of the main pilgrimage sites where kanwariyas come to collect water from the Ganges. Due to this apprehension, the Uttarakhand government has canceled the Kanwar Yatra.

Point number-2: Questions were also raised on bathing of lakhs of people together in Kumbh
Earlier, lakhs of people had bathed in the royal baths at the Kumbh Mela in Haridwar just before the second wave of Corona. On April 12, the maximum gathering of 35 lakhs was reported on Somvati Amavasya. On March 11, on Mahashivratri, 32 lakh pilgrims came to take a bath. People were taking bath without wearing masks.

According to official figures, 91 lakh people took a holy dip in the Ganges from January 14 to April 27. With the arrival of lakhs of devotees, it became very difficult for the officials engaged in the security arrangements to follow the Kovid protocol. However, on the third Shahi Snan on 27 April, the number of pilgrims taking a bath had fallen to 25,000.

The state government was heavily criticized for bringing together lakhs of people in Haridwar and the Kumbh Mela was seen as a super supper. According to the records of the Uttarakhand State Control Room, during the Kumbh Mela in April, 2,167 cases of corona were found within just 5 days. There were 254 positive cases on 10 April, 386 on 11 April, 408 on 12 April, 594 on 13 April and 525 on 14 April. In which many senior Hindu religious leaders and saints were found infected.

Point number-3: Health experts warned
Health experts had warned about the Kumbh Mela even at that time and even now a warning has been issued regarding the Kanwar Yatra. According to experts, the risk of spreading the Kovid-19 infection in the Kanwar Yatra is higher than in the Kumbh Mela as the number of devotees traveling is likely to be much higher than those participating in the Kumbh.

On Monday, the Indian Medical Association had written a letter to the state government asking the Uttarakhand government not to allow the Kanwar Yatra. Due to Corona, Kanwar Yatra was not allowed in 2020.

Point number-4: It is not possible to test so many people simultaneously
During the Kumbh held in Haridwar, it was decided to test the pilgrims, but it was proving impossible to test lakhs of people together. Therefore, the matter of fraud in corona testing in Kumbh also came to the fore. The Uttarakhand government had entrusted 11 labs for the corona examination of the passengers and other people coming during the Kumbh. There are allegations of fraud in about one lakh RT-PCR tests. Due to the fraud of the lab, the testing was done only for show and in reality a large number of devotees coming to the Kumbh got infected with corona.

Even during the Kanwar Yatra, the Uttar Pradesh government has asked the Kanwar passengers to follow the corona protocol and it is necessary for the passengers to have negative RTPCR reports. But when lakhs of people travel together, stay in camps and perform Jalabhishek in temples, their testing will be difficult. People also avoid getting tests done due to the long queues for getting the test done and the time taken for the RTPCR report to come.

What is Kanwar Yatra
Those devotees of Lord Shankar who travel with a kanwar on their shoulder in the month of Sawan are called Kanwariyas. Thousands and lakhs of Kanwariyas walking on foot or by car mostly wear saffron colored clothes. These people mainly fill Gangajal from Gaumukh, Haridwar or Gangotri in Uttarakhand, Allahabad in Uttar Pradesh and Sultanganj in Bihar and offer that water to some holy shrine of Lord Shiva. According to mythological beliefs, it is believed that Parashurama, an exclusive devotee of Lord Shiva, was the first Kanwariya. He took Ganga water from Garhmukteshwar and offered it on the Shivling of present Baghpat city on Monday of Sawan.

Kanwar Yatra takes place every year in the month of Shravan and this time it is going to start on 25th July. The yatra will last for a period of about 15 days and during this a large number of devotees will visit the holy rivers especially the banks of the Ganges. Until the 1980s, the Kanwar Yatra was limited, but later it gained popularity. Today, it is considered one of the largest religious events in the country.

Kanwariyas perform Jalabhishek at Vishwanath Temple in Kashi and Augharnath Temple in Meerut. On the other hand, other temples popular among the pilgrims of Kanwar Yatra are Baidyanath Dham and Vasukinath Temple in Deogarh-Jharkhand where thousands of Kanwariyas from Bihar and Jharkhand offer water to Lord Shiva every year. At the same time, people also come to offer water to the 300-year-old Taraknath temple in West Bengal. Apart from this, people in other parts of the country also go to perform Jalabhishek on major Jyotirlingas in the same way. During the Kanwar Yatra in Sawan, there is an influx of devotees to offer Gangajal to 12 Jyotirlingas and to have darshan of Lord Shiva. It is believed that by performing Jalabhishek of Lord Shiva in these holy temples, every wish is fulfilled.

Where is the abode of Shiva 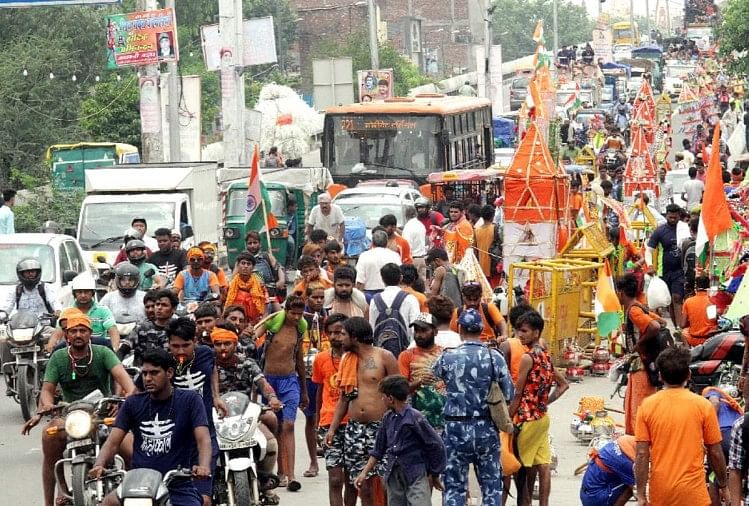