On the third ball of the 17th over, Dhawan completed the fastest 6000 runs on the basis of innings in ODI cricket with two runs. As soon as he completed 23 runs, he became the fastest cricketer in the world to score 6000 runs. He has done this feat in 140 innings. Earlier, Hashim Attack (123), Virat Kohli (136) and Kane Williamson (139) have done so.

Ishan Kishan out for 59

On the fifth ball of the 18th over, Lakshan Sandakan got Ishan Kishan caught by wicketkeeper Minod Bhanuka. In his innings, Ishan Kishan played a blistering innings of 59 runs in 42 balls with the help of 8 fours and 2 sixes. For the second wicket, there was an 85-run partnership between Dhawan and Ishaan.

Ishan Kishan scored a half-century in the debut match

In his debut ODI itself, Ishaan Kishan made a fifty. He completed his half-century (in 33 balls) with a four on the fourth ball of the 15th over. With this, Ishan Kishan became the second player to score the fastest fifty on ODI debut. India’s Krunal Pandya is at number one. He made a fifty off 26 balls on his ODI debut against England. Ishaan also became the 16th Indian batsman to score 50+ scores in his debut ODI. Ishaan is the only Indian batsman to score a fifty on debut in both T20 and ODI formats.

India’s 100 runs were completed by Ishan Kishan on the second ball of the 13th over. After 13 overs, India’s score is 109/1. Shikhar Dhawan is playing 16 and Ishan Kishan is scoring 39 runs.

Dhananjay de Silva was doing the eighth over. Ishan Kishan hit hat-trick fours in this over.

Prithvi Shaw out, played a blistering innings of 43 runs

India got the first blow in the form of Prithvi Shaw on the third ball of the sixth over. Dhananjay de Silva walks Shaw out caught at long on by Avishka Fernando. Shaw batted aggressively during his innings. He scored 43 runs in 24 balls with the help of 9 fours. Dhawan and Shaw shared a 58-run partnership for the first wicket. After this, Birthday Boy Ishan Kishan, who came to bat, opened his account with a six.

Team India’s young opener Prithvi Shaw hit a hat-trick of fours in the fourth over (Isuru Udana). The opener hit three consecutive fours in the second, third and fourth balls of Udana.

After three overs, India’s score is 31/0. Shikhar Dhawan is playing on 6 and Prithvi Shaw scoring 22 runs.

Prithvi Shaw opened the account with a four, 9 runs came in the first over

Prithvi Shaw opened the account with a four on the second ball of the first over. At the end of one over, India’s score is 9/0. Prithvi Shaw is playing with 9 runs, while captain Dhawan is yet to open the account.

Team India’s batting has started in response to Sri Lanka’s 262 runs. Shikhar Dhawan and Prithvi Shaw have come out to bat. At the same time, Dushmantha Chamira is doing the first over for Sri Lanka.

India got the target of 263 runs

The first match of the three-match ODI series between India and Sri Lanka is being played at the R Premadasa Stadium in Colombo. In this match, Sri Lanka has given a target of 263 runs to India to win. Batting first after winning the toss, scored 262 runs in the stipulated 50 overs for the loss of 9 wickets. None of the batsmen could score a half-century from the hosts side. Chamika Karunaratne scored the highest 43* runs. Apart from this, captain Dasun Shanaka (39) and Charit Aslanka contributed 38 runs. At the same time, Deepak Chahar, Yuzvendra Chahal and Kuldeep Yadav jointly took three wickets each for India. At the same time, Hardik and Krunal Pandya got 1-1 wickets.

INNINGS BREAK: Sri Lanka post 262/9 on the board in the first #SLvIND ODI.

Hardik Pandya gave Sri Lanka the eighth blow on the fifth ball of the 47th over. He got Isuru Udana (8) caught at long on by Deepak Chahar. 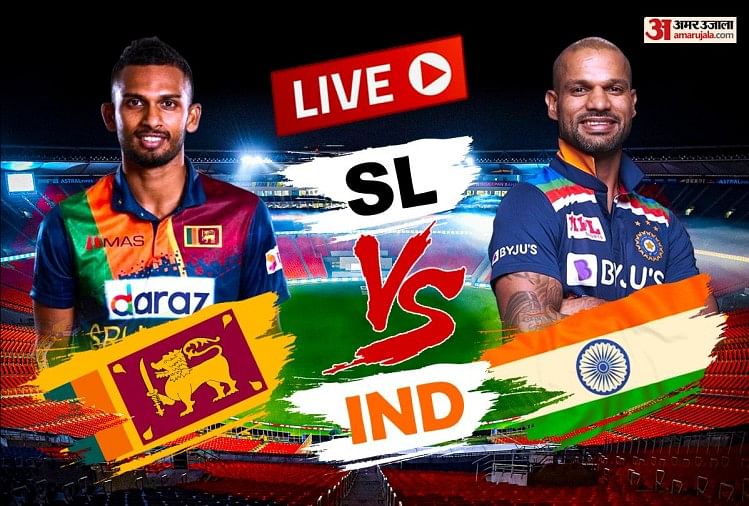