Mumbai. There are many couples in Bollywood who are constantly in the news for some reason or the other. Ranveer Singh and Deepika Padukone are one of them. The two tied the knot in November 2018 in Italy. Both had shared beautiful pictures of the wedding. However, some unseen pictures of their wedding have been leaked on Sunday.

In one of the pictures, Ranveer and Deepika can be seen wearing their wedding attire. In the second photo, both the actors can be seen in front of the camera with champagne-filled glasses in their hands. In another, they can be seen sitting in their car after the wedding and in the third picture they are seen making a toast to each other.

After dating each other for almost seven years, the couple made their relationship official on social media by announcing their marriage in 2018. The two had organized the wedding ceremony in Italy in the presence of their respective families and some close people. The couple strictly followed the no-phone policy for their guests so that no pictures of their wedding were leaked. 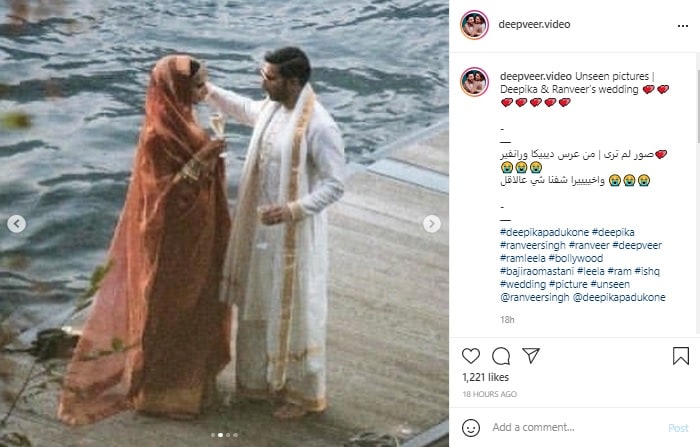 On the work front, the two actors will be seen sharing screen space for the first time in Kabir Khan’s sports drama ’83’ where Ranveer will essay the role of cricketer Kapil Dev and his wife Romi Dev. Rohit Shetty’s film ‘Circus’ is also in this couple’s basket. Apart from this, Ranveer also has ‘Takht’ in the pipeline and Deepika has Shakun Batra’s next film ‘Fighter’, Nag Ashwin’s film with Prabhas and ‘The Intern’ with Amitabh Bachchan.