New Delhi: Many celebrities of B-town have congratulated Priya Malik for winning the gold medal in the World Championship. However, there were some celebs who misunderstood that Priya won the gold medal in the ongoing Tokyo Olympics in Japan. Bhumi Pednekar, Milind Soman and Vatsal Sheth have congratulated Priya Malik for the victory with their social media accounts, referring to the wrong tournament.

Milind Soman tweeted, ‘Thank you Priya Malik! Gold, Tokyo Olympics. Shortly after the post, netizens reprimanded Milind for his mistake. One user wrote, ‘Not in the Olympics… didn’t expect this from you.’ Another user commented, ‘Sir this is the World Wrestling Championship, not the Olympics… it is held in Hungary.’ The third user writes, ‘Do a little Google and find out in which sports competition they have won. It is not necessary to tweet for congratulations without information. Milind has realized his mistake and has apologized by tweeting. Vatsal Sheth also made the same mistake. However, later when Vatsal realized his mistake, he wrote, ‘Sorry not Olympics… but we are still very proud of you.’ 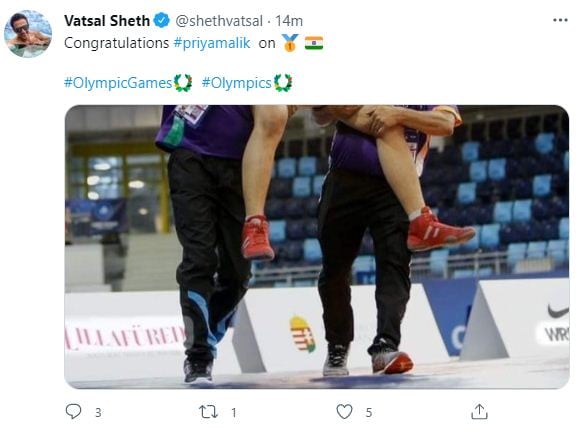 read this also: Good News! Sonu Sood will be seen in the remix of popular song, Farah Khan will be back together