West Indies vs India Shikhar Dhawan Rahul Dravid: India defeated West Indies 3-0 in the ODI series. After this victory of Team India, coach Rahul Dravid praised the captain Shikhar Dhawan and the players fiercely. Dravid said that the team is very young and despite this, it has won by performing well. Shubman Gill played an important role in India’s victory. He scored 98 runs in the last match. Dhawan also reacted to the victory in the dressing room and encouraged the players.

Dravid said, “Our team is very young and the team performed well under pressure. The way the players have performed in the last three matches is impressive. I think Shikhar did a really good job. Best wishes to all of you.”

Dhawan said, “I would like to thank the support staff along with the entire team. Along with the batting unit, the bowling unit also performed well. You are young and keep moving forward.” In the end, Dhawan raised the slogans of champion-champion, encouraging the players. During this, all the players of the team got the photo clicked.

From The #TeamIndia Dressing Room!

PS Watch out for the end – expect something fun when Shikhar D is around pic.twitter.com/x2j2Qm4XxZ

Also read: Commonwealth Games 2022: These 5 women stars can get Team India gold, know how it is performing

IND vs WI: Yuzvendra Chahal breaks his own record of 2018, know why ‘Port of Spain’ became memorable 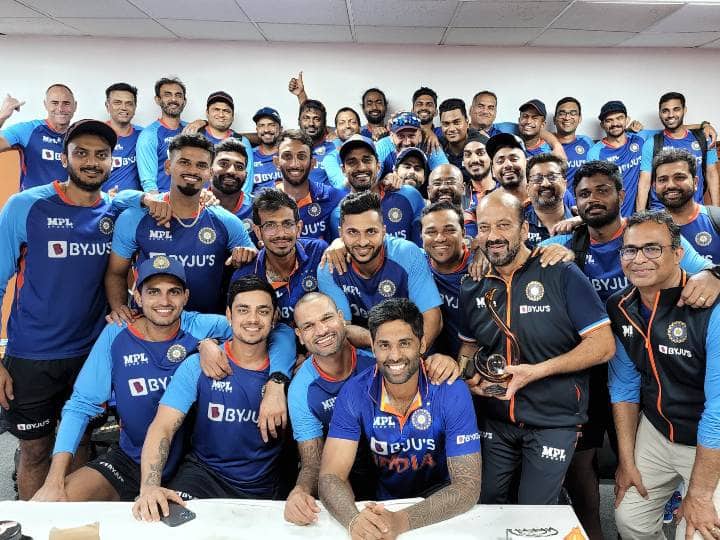